James Miller was born in Jefferson County, Mississippi on 11 January 1795 and died in Waterproof, Louisiana on 14 February 1852.

He married Catherine S. A. Moser in Pine Ridge, Mississippi on 19 August 1830. She was born in Jefferson County, Mississippi on 31 December 1809 and died in Waterproof, Louisiana on 31 March 1878.

Catherine and James had six children, two of whom lived to adulthood – Elizabeth Jane [married Henry Winbourne Drake] and Emma [married Dr. James M. Moore]. Although both Catherine and James were born in Mississippi, they spent most of their lives at their plantation home “Waterproof” near the town of Waterproof, Louisiana. James Miller served his country in the War of 1812.

It was written in his obituary “As a citizen he was ever faithful to his obligations.” James Miller is buried in the Natchez City Cemetery. Carved on his tombstone is a hand pointing to heaven and the words “Born in Jefferson Co. Miss.” His wife, all six children, two sons-in-law, several grandchildren, and his mother-in-law also rest in the Miller family plot. 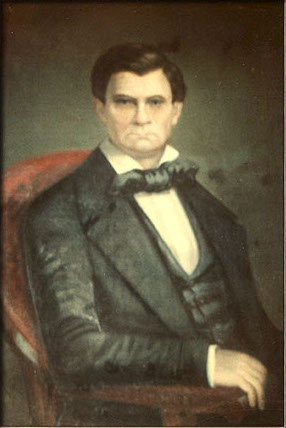